2006. Priscilla Royer leaves Paris for London to complete her course at Studio Berçot in the “experimental fashion design” department of Central Saint Martins. She collaborates with several local young designers and soon joins the studio of Vivienne Westwood. The house’s namesake founder and Andreas Kronthaler have her take over the direction of the Red Label.

2011. Priscilla reunites with her sister Deborah Royer in Paris to start their own label, Pièce d’Anarchive. Specializing in high-end ready-to-wear, the house sets out to test the boundaries of the fashion industry in the 21st century, from design to distribution. The pair's concise, singular collections reference both the rule-breaking anarchy of Anglo-Saxon culture and the classicism of French artisanal savoir-faire. Paolo Roversi masterminds the house’s image from the outset.

2012. Pièce d’Anarchive is named winner of the ANDAM First Collections Prize. Priscilla joins the academic staff of Studio Berçot. She is charged with guiding students in their approach to clothing design through to the elaboration of their identity as a designer.

2014. The fifth and final collection: Pièce d'Anarchive stages its swan song presentation in collaboration with Jean-Pierre Raynaud, with as its backdrop the artist’s iconic work “La Maison”. The label brings the conversation to a close and shutters.

Not long after, Priscilla Royer is approached to become Maison Michel new Creative Director, starting with the house’s Fall-Winter 2015 collection. Across the collections she instills a reappraisal of headwear in a pragmatic and holistic way, from the hat through to the head. Maison Michel with its new aura sees a cast of strong characters – both male and female – enter the scene, sporting head accessories encapsulating the very things that make Priscilla tick: constant quest for innovations, alternative cultural and historical references, wearability, and freedom in attitudes, her obsession being to serve and promote pride in individuality. 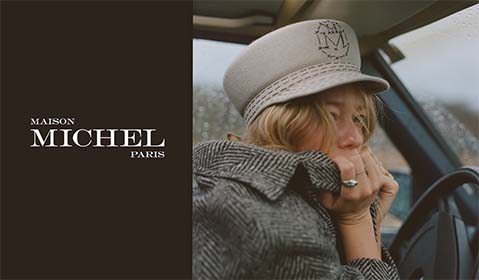